FOSS4G : Leave no one behind

It is under the moto "to leave no one behind" that the free and open source software for geographical information (FOSS4G) community met in Dar Es Salaam last week. 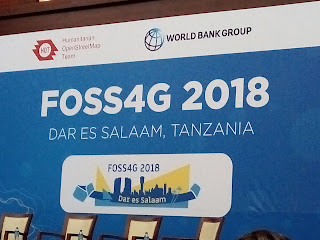 For me and many of my colleagues from the CGIAR it was our first time to join this community as we tagged onto this conference for our annual meeting of the GIS specialist also known as the CSI, no not crime scene investigation but consortium for spatial information! Many of us have actually started migrating to open source software for GIS some years ago, and we were quite exited to learn more about this community.


For the FOSS4G crowd it was their first conference held on the African continent, and for many oversees participants a very first introduction to the developing world. A great effort was made to make the conference accessible to the local community in Tanzania and East African Region, with stipends and engaging the huge local tech community. Despite of that, the average participant was male and white, and no one could really apprehend that I am a white woman yet working and living in Nairobi.

Yet conference show cased many great East African tech initiatives and companies, from the humanitarian open street maps, to WeRobotics flying labs, showing that Africa does not lag behind when it comes to tech application with open source that solve local problems.

The conference was opened by January Makamba, minister in the government of the United Republic of Tanzania responsible for the environment and the Union. He had a great speech, which major message was “If geospatial tools and data do not serve humanity; then they are simply toys”. He made a great start putting African technology and development at the center of his speech. I even managed to shake his hand, pitch him my tool (and not my toy!) that helps local communities to make better livestock plans and raise his attention to ILRI work in Tanzania. It was a great moment.


During the conference i attended many presentations from the non-academic world, from the geeks who develop the codes behind Qgis, to advanced web management for GIS or humanitarian open street maps. It was a big eye opener even if sometimes i felt like an alien in the world of hard core coders.

In the up-coming weeks i will share some more insights from this conference so stay posted!