The challenge of the fasting period : the milk cooperative in Agula

In my last trip to Ethiopia, we stopped in Agula, a town on our way to the site. We stopped at the small milk cooperative, that had 28 members. They collect milk every day, homogenize it and bring it to Mekelle the biggest town situation less than one hour away by car
We arrived on a fasting day : Ethiopian orthodox no not consume any animal sourced product on Wednesday and Friday, 40 days before Easter and Christmas and some other weeks. During fasting period, animal sourced food is not allowed to be shown in public. So when we arrived we only found a small boy. Business is low, and adults are busy bringing the milk and other dairy product away.
The fasting brings many challenges to dairy production? how to store all the milk for 40 days? We learned from the boy he milk price reduces by 2 birr per litre (corresponding to a 20% price drop). But the demand does not disappear totally, there are sufficient non orthodox people and hotels that continue consuming milk. The rest is processed into butter.

It is challenging to set up a value chain around animal sourced food where at least 4 months a year demand is collapsing...

Getting the concentrates : the feed processing plant

Our last stop on my last field trip to Ethiopia was the feed processing plant in Mekelle, the capital of Tigray region. We went to a site where farmer's union have a fertilizer factory and since recently a feed processing plant, that right now is still a temporary construction.
The processing plant stores all raw material. Oil seed cake, mainly sunflower, nug and sesame seed cake that are source from Amhara as well as cotton seed cake that is sourced from Tigray. The maize bran is local when available but also coming from Oromia. In principle they have the same ingredients that the feed retailer in Atbsi. In addition to that, they would also have lime.
They have been trained to do the right mixures for fattening cows and for dairy cows. There is no specific mix for sheep. Different oil seed cake have different nutritional values. Therefore each batch that arrives has been tested for its content and the mixing recipe adjusted consequently. 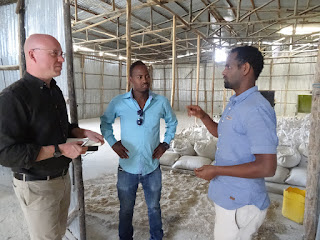 Because it is a union, orders come in through cooperative. Feed is then delivered to these cooperative, where the farmer can go and pick his order. Therefore, the feed processing plant does not know to how many farmers they deliver. There is also one big ranch that directly sources from them.
So finally, this feed processing plant is mixing the same ingredients than the feed retailer. The only difference is that the concentrate from the processing plant has been mixed with the right ratios, providing optimal energy to the animal. It is therefore a guaranteed quality.
Written by Unknown on Monday, March 20, 2017 No comments:

One objective of the my past trip to Burkina Faso was to validate some of our maps, and more particularly the land cover map.

So we decided to go North of Bama and to turn right into the dust road to Padema, there were the savanna should be.


And this is what we found in the savanna :


Conclusion, we will have to think hard on how we want to define grazing and cropping area in our environmental model!
Written by Unknown on Friday, March 17, 2017 No comments:

Whose grazing land? the seasonal rights on communal land

Atsbi, the study area in Ethiopia for my current project, has made a bold move from free grazing to zero grazing.

Free grazing means that animals can just freely move around the landscape and eat crop residues from fields and natural grazes where ever they find them. This leads to the classical tragedy of the commons, no one has incentives to keep the right number of livestock as feed is free. Therefore the landscape gets over-exploited.

The move to zero-grazing means that farmer keep their livestock at home and feed them from their own land. Livestock that does not move also consumes less, there is therefore an additional benefit.

But what is happening with the grazing land that previously was freely use? how gets access to that grass?

Grazing land is often considered as community land and therefore managed by the community. We have visited two of them and talked to people around to understand the management.

We discovered that access was seasonally regulated. During the rainy season access was restricted to all. After the rainy season, farmers with certified land would share the grazing land according to oxen ownership. Who has 1 oxen gets one share, who has 2 gets two share. Note that who is landless (who does not have certified farming land), does not get access, because they do not need oxen, though they might actually own a dairy cow. There are paid guards who make sure that no free grazing takes place.


After a certain amount of time, the grazing land is becoming common grazing land again. Who has not made hay or collected his share of grass by that date, will just loose it, as others can come with their animals to graze it.

In conclusion, there are seasonal property rights on grazing land! There is only one exception : the church cow can graze anywhere any time, it benefits to all, so one one will chase it away :-) .

What revolution can the drones bring to the livestock sector?

Last week, i joined the workshop on Animal Health Delivery in pastoral zones. I have been asked to discuss how geospatial technology can bring change into this industry. Here is the power point presentation i gave :


The workshop brought together government representative, NGO and private sector to discuss what are the challenges and opportunities to bring animal health to pastoral zone, an area that has cope with low infrastructure, low and moving populations.

The biggest constraints identified  were :

The biggest opportunities identified were :
It was a fascinating workshop : it will lead to an in deepth study to understand these limitations and opportunities better, including trying to work with drone data. Definitely interesting work deserving a follow up!

whose animal? whose work? whose money? a gender reflection from Atbsi

On my last trip to Atsbi, we met two farmers who kept dairy cattle : one man, one women.

For the women, she clearly felt that the animal was a common ownership between her and her husband. When we interviewed her, the husband had gone with the animals to the water point.
She would feed and milk the cow. She showed us how to prepare and mix feed for the animals, she got training for that. Having a Holstein dairy cow increased her labor, as she is now preparing optimal feed for the cow. She mentioned that this was now possible because her children are a bit older. A quick look at her children told me she meant no breastfeeding anymore.

She was selling the milk to the cooperative. It was difficult to understand what she does with the money. As far as we understood, part of it would go to buy the concentrate feed, and this could be done either by him or her. If he goes she would give him the money for that.
Clearly, in this household, the care of the animals at home was a woman's duty, no wonder she had small children and she would stay at home. The husband would take over the tasks a bit further from home such as going to water points or getting feed.

We got at very different picture from the landless dairy cow keeper in the settlement. The cow was his and he would fully take care of it, from feed to milking and selling. His wife had a job, and the livestock was his activity and a secondary income for the household. He was a carpenter and keeping livestock was not his first choice. But he said that now he sees the benefit, he is happy with it.
Clearly we did not interview a representative sample size, but from the two interviews we had, it is clear that gender role in livestock keeping can be very different in each households even when they are less than 2 km apart.

I still wonder why i did not ask the man what he does with the money he makes from milk, and who takes the decision on how to spend it. Is that my own gender bias?
Written by Unknown on Friday, March 10, 2017 No comments:

Milk? that's a matter for the minister of Interior!

During our visit in Bama, in Burkina Faso, we talked for some hours with the livestock union. At the certain stage of the discussion, we asked them about gender roles.
Milk is clearly a matter for women, who handle both the milking and the sale. This makes sense as milking cows just like women tend to stay home when young men go on transhumance with the rest of the herd.
But we digged further... we discovered that men and women own their livestock within a herd. We were told that in some households women own more cattle than men, but men would take care of them. So we dug even further. So who decides about the sale of an animal? then it became very complicated and the men started talking and laughing.

The translation for us then was : madam is the ministry of Interior, she takes all the important decision in the household, but never openly, men will implement the decision from their ministry and do as if it was theirs!

We were discussing just with men. Next time we go back we will need to talk to women to see their version of the story! 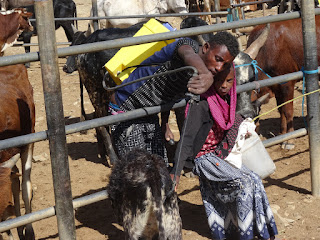 One way to improve livestock productivity, is to offer veterinary services. At the entrance to Atsbi, a veterinary post run by the government can be found. When we arrived there, they way spraying animals with pesticide, so that they would not be attacked by mites that can lead to skin issues. In the rainy season they spray to avoid ticks who are the carriers of East Coast Fever. 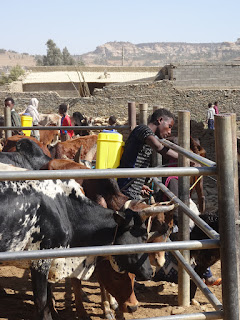 A cow or two sheep get sprayed for 1 birr, a heavily subsidized price.
Written by Unknown on Wednesday, March 01, 2017 No comments: