Agriculture in the jungle

My search for a new adventure brought me to the Philippines : a place were rice means food security and has shaped the most amazing landscape with terraces and complex irrigation systems. I could not help going for a trek in the area of Banaue where these terraces are, inhabited by the Ifugao people .

The up-coming blog post series labelled Ifugao trip will give you a chance to discover this beautiful and interesting region.

Rice is not native to the the Philippines, it has been introduced about 2000 years ago. Before that Ifugao people were living on sweet potatoes, planted in the middle of the jungle. Still today when crossing the jungle to reach rice terraces, one can find these very little patches of agriculture on the steep slopes.


These patches are won from the jungle from the already deforested area with a slash and burn system. In some patches are divided in 3 and distinctively have a crop rotation : sweet potatoes, beans and fallow, sometimes also combined with banana on the boundaries.

Often the sweet potatoes is inter-cropped with cassava as well as (for me an unidentified) tree that produced edible bean suggesting that it is a nitrogen binding plant. Also sometimes one can finds fields where sweet potatoes and beans are intercropped.

Looking at this rain-fed system, it looks pretty sustainable. The patches used for agriculture are relatively small (there is a lot of untouched jungle left). There are areas that are left fallow, allowing the soil to recover. The biomass on the fallow area will be burned before planting crops. The burning increase the fertilization of the soil (in the short term) also the combination with both the green beans and the "bean tree" increases the nitrogen (=soil fertility). 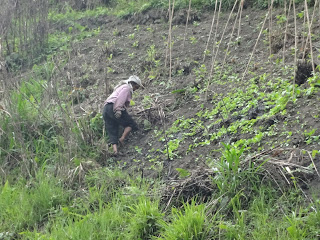 Probably, the rice terraces, providing staple food and insuring food security has helped to keep the slash and burning system relatively limited still allowing for fallow patches despite of the increasing population pressure.
Written by Unknown on Monday, January 21, 2013 No comments:

Land grabbing or development : a reflection from Mali


Recently i have reported from a new campaign, why poverty?. They produce short and long movies about controversial issues linked to poverty. What I like most, is that movies from this campaign are not polarizing, but trying to show the different stakes and sides from the problem.

I just watched the movie on "Land rush", and really liked the way the movie tries to show that direct foreign investment into agriculture in not per se a bad thing (also see http://catherinepfeifer.blogspot.ch/2012/11/land-grabbing-or-development.html). It follows an investor who tries to buy in the local population into the project, making sure that his project benefits to development of the local community. Have a look, it is a impressive movie showing the good side but also the turn downs of such big projects.


Basically the investor tries to plant sugar (that needs irrigation), each part of the sugar farm should be maintained by smallholders (whose land has been taken away) and who becomes agricultural contractors. A similar project seem to be a great success in Zambia, where people have been lifted out of poverty, as they earn now enough and get access to free health services and education.

However what i miss out of the discussion is a bit food security, not so much at local scale (as the contracted farmers would earn enough to buy food), but at global scale shouldn't we actually focus on grain production rather than sugar and try to get the world food price down for staple food? (see http://catherinepfeifer.blogspot.ch/2012/12/hunger-for-profit.html). The other point that is not discussed in the movie is water. Sugar cane is very water intensive. Where does it come from? is it sustainable? and how will the sugar project change the water access for the local population, both for the ones that buy-into the project and those who opt out?
And my last concern, how can we insure that the benefits that are given to the community are going to be there in the long term, or in financially difficult times? will the management of the sugar plant be participative? what will be done to avoid corruption?

But in general, I think it is a great try to make agricultural development based on market opportunities, allowing theses farmers to move away from their dependency on aid.
It makes me very sad to see that with the Mali Coup d'Etat, the sugar cane project lost all its support from the government and could not be implemented, whereas all the other investors that are truly land grabber just could continue. It is a missed opportunity to prove to the world that market based agricultural development that benefits to the communities is possible.
Written by Unknown on Wednesday, January 09, 2013 1 comment: