Ethiopia is missing out on becoming something far more impressive

Despite of my hate-love relationship to Ethiopia, my host country between 2010-2012, i like to keep an eye on the most recent development. Ethiopia remains one of the most fascinating countries, that is run against all principle the Western World believes in, and yet goes against all odds its own yet very interesting development path.

In my flight yesterday, i came across this  economist article, looking at the role of the Ethiopian elite in the Ethiopian success story but also how the elite is hampering the most recent development, as the author will say "in some ways the elite is a victim of its own success".

Check out on this article that reflects on this country with much subtle combination of different visions. 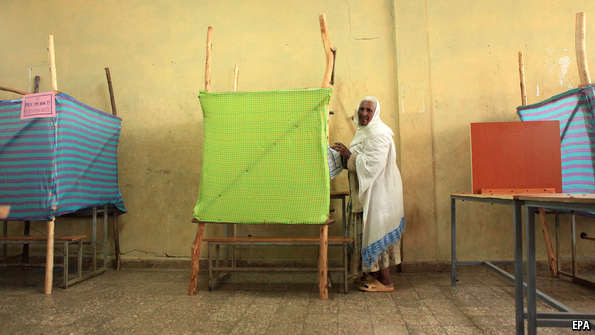 
Neither a sprint nor a marathon

NOWHERE in Africa is modern China more of a lodestar than in Ethiopia, which on May 24th held an uneventful election with a predetermined outcome: another term in office for the long-standing ruling party. The continent’s second most populous country and fastest-growing big economy has close intellectual links with China’s Communists and often sends officials to their party school in Beijing. There Ethiopians imbibe the gospel of industrialisation overseen by a strong state that exerts tight control over an ethnically diverse population with a history of strife.
But all is not well in the relationship. When a new Chinese ambassador arrived in Addis Ababa in February, he presented an unexpectedly awkward message to his hosts. La Yifan told the ruling elite—behind firmly closed doors—that it must discard the isolationism of the past and open up an economy in which the flow of money and information is still restricted. Banking and telecoms are almost antediluvian (see chart). Investors are frustrated. Trade lags expectations. After years of praising the government, the Chinese are now singing from the same hymn sheet as Ethiopia’s Western critics. 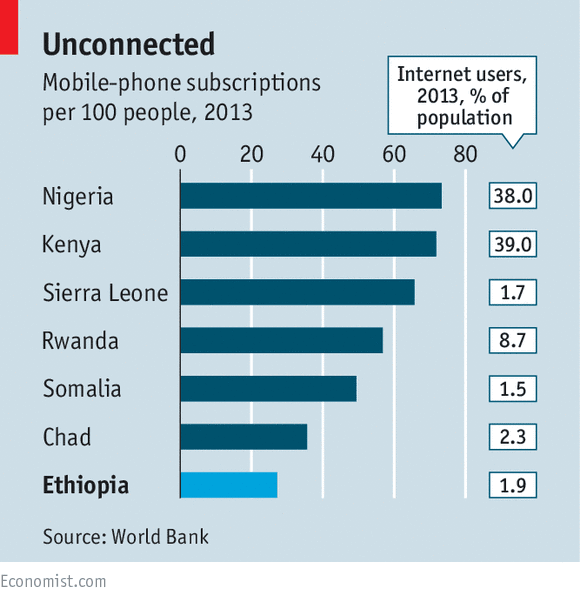 The problem is a lack of courage. Many in the Ethiopian government, ruling party and security apparatus acknowledge that only further reforms can sustain the goals of economic growth and political stability. But they are slow to enact them.
The government’s main priority is industrialisation. But endless red tape and restrictions on finance deter investors. Officials point to Huajian, a Chinese shoemaker that has gone from employing 600 locals to 3,500 in a few years. But Ethiopia needs a hundred Huajians. Without faster growth of industry, the country will struggle to absorb labour it hopes to free up from modernising subsistence farms that provide a living to 80% of its people.
The government is trying to help industry by building roads, railways, power stations and dams—following the Chinese playbook. These efforts have kept the official GDP growth rate above 10%, although outside experts reckon a more realistic tally is 7-8%. Inflation has dropped to single digits. But no progress has been made towards joining the World Trade Organisation in the past three years. And the prospects for attracting desperately needed foreign equity capital remain dim.
The fear of being overthrown looms behind the elite’s reluctance to reform. In some ways it is a victim of its own success. Discipline and administrative sophistication have given the elite access to coercive tools that many counterparts on the continent can only dream of. But now it finds it hard to imagine life without them.
The situation has become worse not better since the death in 2012 of Meles Zenawi, the prime minister and architect of the country’s resurrection after a bloody civil war between 1974 and 1991. By force of personality, intellect and ties forged in battle he could on occasion shift the system forward. Admittedly, he hated the private sector and civil society. But at least he removed logjams. After his death the government pulled off a peaceful transition of power. The deputy prime minister, Hailemariam Desalegn, took over as planned.
The new leadership is much more collective. The prime minister is no Meles, whose legacy as it turns out included masking how divided the regime has always been. Before ministers make decisions now they often need to seek the consent of the old guard. And ethnic Tigrayans, of whom Meles was one, still control the army, security services, telecoms and foreign affairs. It will take at least another decade for them to retire or die.
The new prime minister is a reasonable and, to some extent, reform-minded man. But he is a relatively weak figure. He is probably going to be confirmed as party leader at a congress of the ruling EPRDF in September, but his tenure is not assured. Few have forgotten why Meles chose him: as a political leader from the ethnically fragmented south of the country he is no threat to the more dominant groups.
One senior member of the Chinese community in Ethiopia describes, with some frustration, what he sees as the country’s big problem: that in China the central government dominates the regions but in Ethiopia everything is federal. Business parks are built by regional rota, for example, not in the best locations. Furthermore, Mao’s maxim that “the party controls the gun” is neglected; the securocrats are a law unto themselves.
And lastly, although the senior leadership in Ethiopia is very capable, the country lacks China’s talented mid-level administrators. Overall, many Chinese see a country that is dotted with too many powerful barons.
What the Chinese won’t say but many Western observers do is that political repression also weakens the system. Young people are angry and jobless. Outlets for their frustration are quickly shut off. Sensible opposition leaders are pushed into exile or prison, ceding the field to hotheads. Universities have grown more than tenfold but there are insufficient jobs for all these bright new graduates.
Ethiopia is stuck thanks to its paranoid elite. The country will be able to limp on for a while, given its impressive growth rates. It may even get further boosts from new infrastructure like hydropower. But Ethiopia is missing out on becoming something far more impressive.
Written by Unknown on Thursday, June 04, 2015 No comments: