Risk diversification : or how to cope with african swine fever!

During my last trip to Hoima, Uganda, we visited the farmer Paul. He was a young dynamic farmer. He had more than 100 pigs when African swine fever took them whole away. He fortunately could sell them off before they died and could at least partially recover some investments.

We visited the  empty infrastructure that he want to restart using soon but with less pigs, around 60 pieces, or 6  production units with a sow that give around 8 piglets every six months, so having 8*6=48 pigs for sale every six months. 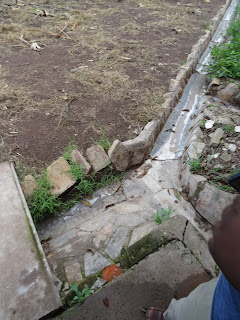 His major business is the sales of piglets which brings a lot of people to his farm. He is convinced that one of his clients brought him African swine fever and therefore wants to move away from the piglet sales and outgrow more and slaughter in his slaughter place on farm.

His manure management was quite minimal, he had these channel leading manure to a soaking pit in the middle of his pineapple fields. The pineapple grew better and he was very happy about that. However he is also aware this is not an optimal management, and he would need to look into that as business would become more profitable again.

At least his shallow well to access water was in the amount of the soaking pit, so at least he would not pollute his own water. He is thinking about a bio-digester, as he could get free energy to heat his chicken as well as for hot water for backyard slaughtering of his pigs.

To feed his pigs he would rely on commercial feeds. But as he own his own mill, he would buy ingredient separately and mix his own feeds. As he did not have electricity on farm, the mill was powered  with a generator. As he grows this business, he wants to feed waste from chicken slaughtering to pigs, as well as the slurry from his future from his future bio-digester.

But what impressed me most with Paul is that despite of the loss from the pigs, he would continue business. He had chicken, a 1000 broilers and a 1000 layers to learn about this market.

And his pineapple business was not affected by diseases and gave him a constant income.

It was a nice example of a farmer who made farming an agribusiness. Risk was nicely diversified and no branch for his business could kick him out of farming fully, always one product would work.

Before we left, i asked him where he want to be in future. He told me that the farm i see now will become a model farm, as he want to get cheaper land outside Hoima for intensifying his pig production. There no one would be allowed in, but farmers would come to the model farm to buy piglets and for training and demonstration.

Will Paul be one of the two high level fully integrated farmers, participants of the workshop were dreaming about in the their vision for Hoima 2025? The future will show, but definitely he has the vision and the capacity.

Once again, I have been deeply impressed by a young man showing the world that agriculture is not a job for losers in society but for young entrepreneurs taking up the challenge to feed Africa while being profitable.