Accessing groundwater is the easiest way to give smallholders in Africa access to safe water. In addition, during dry spells smallholders also have access to water for livestock or for supplemental irrigation. Therefore the use of groundwater could be a very good option to mitigate effects of climate change. Despite of general agreement across all development sectors on the benefits of using groundwater for smallholders, very little is happening on the ground. This is because we still lack information about where and how much groundwater is available. Now, a British team took up the challenge to review a continent wide groundwater literature and completed it with own data in order to fill this knowledge gap. And they found that there are huge water reserves hidden under the African continent...a glimpse of hope for a continent that desperately needs better access to save water...but let's hope that there will not be a rush on this "blue gold" by commercial farmers leaving the smallholders out of the game (see http://catherinepfeifer.blogspot.com/2011/11/is-it-really-about-land-grabbing.html).

Find here the very informative report on Aljazeera about this research:

Written by Unknown on Wednesday, April 25, 2012 No comments: 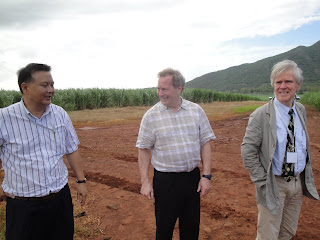 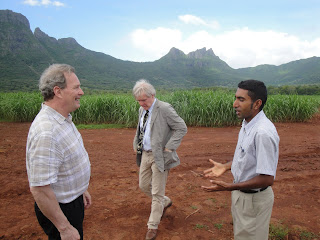 How to engage with policy makers : the role of academies (Mauritius reporting series)

The Dutch Academy of Arts and Sciences (KNAW), the the German Academy of Sciences Leopoldina and the the Network of African Sciences Academies (NASAC) were the convener of the conference on water management issues in Mauritius, that was organized in closed collaboration with Mauritian academy.
So many academies... It was but what are they role? and what do they do beyond "bringing gray-heared man" together? How do they start a dialog between science and policy maker? Why water is a major topic to involve a policy-science dialog in Africa? And what is the role of young researchers in those academies?

Jackie Olang, from the Network of African Science Academies (NASAC) answered this questions for us :


NASAC was founded in 2001 and it "aspires to act as an independent African forum that brings together Academies of Sciences in Africa to discuss scientific aspects of challenges of common concern, to make common statements on major issues relevant to Africa and to provide mutual support to member Academies. Drawing from this, NASAC aims to specifically facilitate the provision of advice to governments and regional organizations on scientific aspects of pertinent issues to Africa 's development through science academies."
discover more under : www.nasaconline.org
Written by Unknown on Sunday, April 15, 2012 1 comment:

Why the Blue Nile waters are brown? (Mauritius reporting series)

In conferences, it is always interesting to meet people who are working on similar topics in similar regions. Professor Pieter van der Zaag, works in the Blue Nile, both in the Ethiopian Highlands and in the Sudanese lowlands. He presented a poster that gives an overview of the work he and his team does. Watch his poster presentation :
and here is the poster : 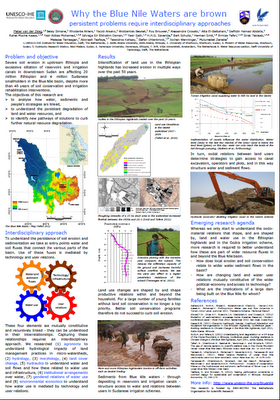 What can Africa learn from China? (Mauritius reporting series)

Ethiopia and China : both countries have a socialistic background, both have been relatively closed countries. One has one of the most astonishing economies in the world, the other is still stuck in poverty. I have always been wondering what Ethiopia could learn from China.
It turns out that at the conference on water management in Africa hold in Mauritius, I met someone who could answer this question: Prof. Meine Pieter van Dijk from UNESCO-IHE, Delft, the Netherlands. He has been running extensive surveys on water management in China. He has looked at which laws and legislation have an impact on the ground, and how the farmers on the ground interpret these laws and legislation. He found that even if in the past the government used to organize and control everything, farmers in China today organize themselves in informal institutions to address the gaps when laws and legislation do not reach the ground. There is lots of scope to understand these informal institutions and bottom up initiatives better and take them into account in policy recommendations.