On my last field trip to Burkina Faso, I met Konde, they dairy farmer in the periphery of Bobo-Dialassou.


Konde is a livestock breeder, he has 4 milking cows, 12 cows on the farm and a certain relatively big amount of cattle somewhere else. He is a farmer who took the bet for dairy production and 10 years ago started breeding improved cross breed. He has been part of the a training program for artificial insemination program that was implemented in 2009 by the government and the support from Canada. He today can perform artificial insemination, and produces calves he can sell up to 10 more than what he could get for a local calf. He currently feeds his animal crop residue from sesame, maize, sorghum that he produces on his own land, and natural grasses that he has collected from communal land such as river banks and road side, as well as grassing land from others for which he could get the authorization to collect the grasses for free. He also was feeding a proper concentrate produced in Ivory Coast that he could access at subsidized prices. As we came just after the harvesting season, cattle is roaming in his fields to eat the crop residue. In the dry season he would also feed cotton seed cakes, maize and wheat bran and bier residues that he would buy, as well as rice straw he can get for free. With this diet he can produce 12 liters of milk per cow. He mentioned that he had now more milk with his four milking cows, than before with this 150 headed local breed herd. 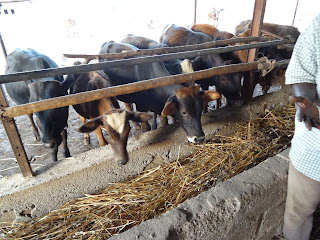 In terms of feeds, he has tried out several approaches. In the past, he was growing maize for silage. As he would use the whole crop, the community said he was crazy, but he could appreciate the higher productivity he could get thanks to this approach. However, this year he did not produce any silage, because he could not hire people to the work. The next door mine are offering better paid jobs and agricultural labour is scares. Yet, looking at the labor that is needed to collect the natural grass, we wonder if this is the real reason.

Secondly, he had tried to plant braccaria, a high performing and nutritious grass. But because his fields where not fenced roaming animals have eaten the roots. Today, he has a field planted with alfalfa. This had been suggested by a Dutch expert who also financed the electric fencing of the field. Yet, the alfalfa did not perform well, other grazes grew quicker and overtook the field. He had actually would have preferred to have braccaria, but the expert had pushed for alfalafa, and himself would not know where to get braccaria seeds from.
Konde is also the president of a farmer organization bringing 30 farmers together, mainly with the propose to produce sufficient milk so that a collector comes and picks it. But they are also exchanging information, advice and feeds.

Konde had two wells with electric pumps, the one that he set up himself is still working, the other one set up by a project was defect. But water access is not a problem. Also there was a tractor and some machinery that looked pretty old and broken, but we were told that is was still in use.


Clearly, Konde is a farmer to whom many innovation were brought to. He has tried many of them, and abandoned most of them, such a silage, alfalfa, the unused trough. And few he has kept some of them, the artificial insemination or the water pump that he has build from his own money. He clearly shows that what he had to invest his own resource is still in use today, what he got for free through project he does not pursue after the money is gone. Once again, pushing farmer to adoption of technologies and innovation does not lead to long term success.
Written by Unknown on Monday, January 23, 2017 No comments:

There is an ongoing debate among us on whether a poor livestock keeper is more likely to consume animal sourced products. We always have the hypothesis that if the denomination of the animal product is small, for example an egg, or is separable, such as milk, poor livestock keeper will have an improved nutrition. But they will sell the whole animal and therefore not consume meat.


So on the last trip to Burkina Faso, we have asked the livestock keepers from the livestock union in Bama, about their consumption of milk and some breed experts. 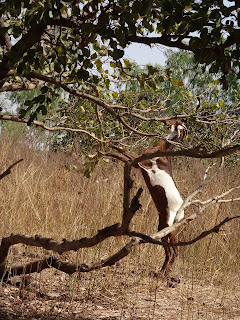 We came up with the following rules rules : 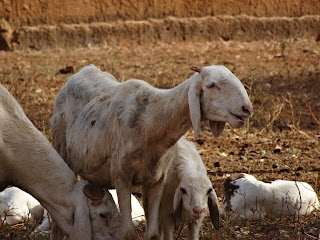 So we got interesting insights on how to link livestock ownership to nutritional benefits through animal sourced food. A linkage worth investigating more.
Written by Unknown on Thursday, January 12, 2017 No comments: