During the participatory stakeholder workshops in Burkina Faso, Ethiopia and Tanzania, workshops cannot be hold in English. So in many countries we had to rely on translators. For example, the participants in Burkina Faso spoke French, Jula and More, but there was no common language to all, so we really had to juggle to make sure that we have everyone on board and no one gets excluded because of language barriers.

We have hired facilitators/reporters to work with smaller groups of participants, who speak the local language. It also means, that we had to trust the facilitators to do their job well, as we had little means to cross-check what is going on during the group discussions. For example, in Ethiopia the workshop was held in Tigrinay, which is spoken in Tigray but is not the national language, which in Amharic. So in Ethiopia even our national partner who helps us organize the workshop is not able to understand what is going on.
A huge responsibility therefore weighs on the hired group facilitators/reporters. To make sure that they get the skill to do their job well, we implemented a two days training. The first day aimed at giving the facilitators the skills to "give everyone in their group to do the best of their thinking". This part of the training were based on Sam Kaner's book and approach, and we mainly focused on active listening. On the second day, we when through a "dry run" of the workshop, to show facilitators/reporters what their job is, what we expect from them, and which results we would like to reach.
During the workshop, facilitator/reporter were assigned to discussion groups in pairs, so that one can facilitate and the other take notes, as well as always being two in difficult situations.

After the workshops, facilitators and reporters wrote a report about what was discussed and what has happened in their groups in English or in French. This is often our only way get access to the information that was shared in many different languages.
The facilitators/reporters did a fantastic job in all three countries : they had to learn new skills and understand their role in a very short time, handle difficult situation is their groups and remember to report everything with as many details as possible. They are key to our success and to the data we can collect.
Let me take this opportunity to thank the three teams in all 3 countries for their enthusiasms to take up a challenging task and the great job that they have done to support us.
Written by Unknown on Monday, September 18, 2017 2 comments:

How to count animals in pastoral area?

During my last workshop in Burkina Faso, a stakeholder category were pastoralist, this are livestock keeper that at least part of the year have migrating animals. In Burkina Faso, i went to have a mint tea with representative of the Peul community, one of the pastoral communities in Burkina Faso, in order to understand how they think and how we can somehow figure out how many animals they have.

Here is what i have learned :
Firstly Peuls will never about livestock numbers, this is a taboo as it is for western cultures to talk about salaries. This is out of fear to be taxed when crossing different countries with their cattle. It was therefore very difficult to ask them about livestock numbers.
However, they talk happily about what they define as troupeau. Though troupeau means herd in French, the word cannot be translated.

This is why:
A Peul household is complex, as it is generally composed of a head of household with several wives who has several children. Every child at its birth is given a female cattle, and all its offspring will belong to the child when he or she marries. As a result, every animal has a clearly defined owner within the household and women own livestock too. We will refer to all animals that belong to any of the household member as the overall household herd.
In order to manage risk, the head of the household split the overall household herd into different sub-herd, that the Peul refer to as troupeau, which will follow different transhumance routes with different herders (who can be a member of the family or hired). Also, different household may pool their different troupeaux to go on a transhumance route with the same herder. As part of a risk mitigation strategy, the Peul nowadays have what they call a “troupeau laitier” that is a troupeau of female animals that give milk and therefore do not go on transhumance. This allows part of the family, mainly women and children to live a sedentary life and live from the sale of milk.
Next to the dairy cows, the weak animals also remain at home, they will be fattened over a certain amount of months to be sold for meat. These animals are not considered as troupeau as they are very few and can be asked about the number of animals.

What does this implies?
And now imagine a scientist coming asking any one in this system about how many animal he or she owns?

Written by Unknown on Monday, September 11, 2017 No comments:

What does it take for successful farm diversification? a comparison between Italy and Switzerland


This small feature suggests that farmers in Tirol are very well organized, and promote themselves as a group. They have adjusted their other activities in a way that it is easy to combine with agro-tourism, because they clearly have a big demand from tourism.
A model for Switzerland ? i guess we are trapped here between demand creation (is there demand in Switzerland where everything is so expensive for agro -tourism?) and between farmers starting to show innovation. Clearly there are very few farmers in Switzerland to took up the bet of of agro-tourism. Why not work with them to develop it further?
Written by Unknown on Wednesday, September 06, 2017 2 comments:

How does a bright future look like in Atsbi Ethiopia?

During the recent participatory workshop in Ethiopia, we asked participants in groups of stakeholders to think through a bright life in Ethiopia in 2030. From these narratives lead to indicators of what people value.


For Atbsi, participants came up with a series very different indicators and a series of very similar indicators. 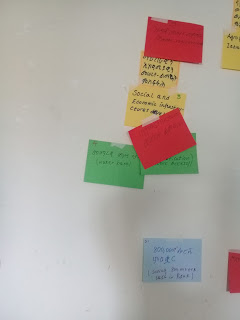 Some of the common indicators, are better education for children, better mobility as well as better accessible  technologies to make life easier.

But what was the most interesting part of the Ethiopian workshop, we presence of very young participants. I always knew that, in Ethiopia, it is fully acceptable that women can take their young children to workshops so that they do not need to arrange child care. So we had a 2 year old girl that joint her grand mother to the workshop.
Also another illiterate lady took her 12 year old daughter to the workshop, because the daughter can read for her. Though we really try to make our workshops accessible to illiterate people by using images and colors, it was not a bad strategy.  It was also for us the opportunity to ask a girl about what she aims at in life. She told us that a better future for her is a world where she can support her parents so that they do not need to work so hard anymore. She is also hopping to get good education so that she will be able to support her parents.

At the end of the workshop, we asked the girl separately about her evaluation, and she mentioned that she was very proud that her personal opinion was asked and listened to.

It was a great opportunity to hear from the next generation about what they value.
Written by Unknown on Sunday, September 03, 2017 1 comment: