sweet dreams are made of these : sweet shops as major milk consumer

When one follows the milk chain in Bihar, you discover quickly that most of the informal milk chain to urban areas go to sweet shops. I was quite suprised, as in my world milk has to be transformed in yogurt and cheese!

We had a longer discussion with the owner. He get his milk through vendors who pick the milk from the farm. He pays about 34 rupees per liter for the best milk quality. The price is fixed based on the amount of condensed milk that he is able to make from a liter milk. So if a farmer mixes in water to get more milk, then he simply gets a lower price.

In the back of the shop, there is a man with a huge pan, making condensed milk the whole day long. So we were wondering about milk shortages. And indeed, there are some peeks in demand, then he would first try to buy the packaged milk from the cooperative and then use powder milk. Interesting, as the packaged milk might also just be regenerated powder milk.

The sweets tasted marvelously, whatever milk was used! And we proceeded our trip further.

However landless people never have money to pay half a cow, it is always the owner of the cow who gets it back and starts making good money from milk. Would a landless person get access to a dairy cow and be able to sell the milk, then it could be a sustainable pathway out of poverty.
Centre for Promoting Sustainable Livelihood (CPSL) and their RojiRoti program has decided to end this vicious cycle by offering fair micro credits to landless women to keep a dairy cow through paying half of the value to the owner.

It is not commercial micro credit : CPSL works on organizing women around rotating saving and credit organisation allowing landless people to get short term credits for health or immediate needs from each other.

An interesting scheme that seems to unlock poverty traps where landless people are often locked in.

Find out more about this here.
Written by Unknown on Friday, October 24, 2014 No comments:

Arrest this vendor! or the risks of an informal milk chain

On my recent field trip in India, i have tried to follow the milk routes from the producer to the final custumer. In Gaya town, milk reaches the cities mainly through an informal chain. Vendor on their bikes, get milk from farmers and sell on the street.

We interviewed one of the milk vendor. He told me that he sells different quality of milk. The highest quality goes for 40 rupees. After some discussions, i discovered that he is adding water to his milk. Water he promised me was very clean in his home. He would fix lower prices for the lower quality milk, i.e. the one in which he has mixed water, in such a way that he get the equivalent of 40 rupees per liter of pure milk. So if he would add 1/3 of water the price would go down by 1/3. It made a lot of sense...
The people around me started to become very nervous, shouting at him that he is a thieve and i should arrest him! We let him bike away quickly, and i understood why promoting a formal milk chains in the area is crucial. The packed cooperative milk in other towns is cheaper, comes in a cool chain and is pasteurized...

From IT to the dairy farm : when young people take up the challenge of agri-business

In India, as most of the developing world, being a farmer is equivalent of being a looser who did not get a well paid job in town. Clearly, being a subsistence farmer, producing his/her own food in a low productive manner is not a very sexy job, nor a fulfilling career. I was told, if you are a farmer in India, you won't get a wife...

In many developing countries, and especially in Bihar, agriculture is at the edge of a transformation.
Young people have left the rural areas, the government has offered schemes to landless people, who usually would be cheap daily laborer, to move out to agricultural work. As a result, rural area suffer of a massive shortage of agricultural laborer. Also as people move to town, land because available for sale or for lease. It might sound dramatic, but is probably a once in a lifetime opportunity for young agri-enterpreneur to start their business and make a bet on increasing scale and mechanization. Being a farmer in this new context, is being a smart entrepreneur who understood that producing food is producing a product that will never become obsolete and that always will have a market. It is about taking the challenge of being the change that everyone is talking about and make money from it. I guess this agri-entrepreneur has nothing to do with the subsistence farmer who does not even deserve a wife... 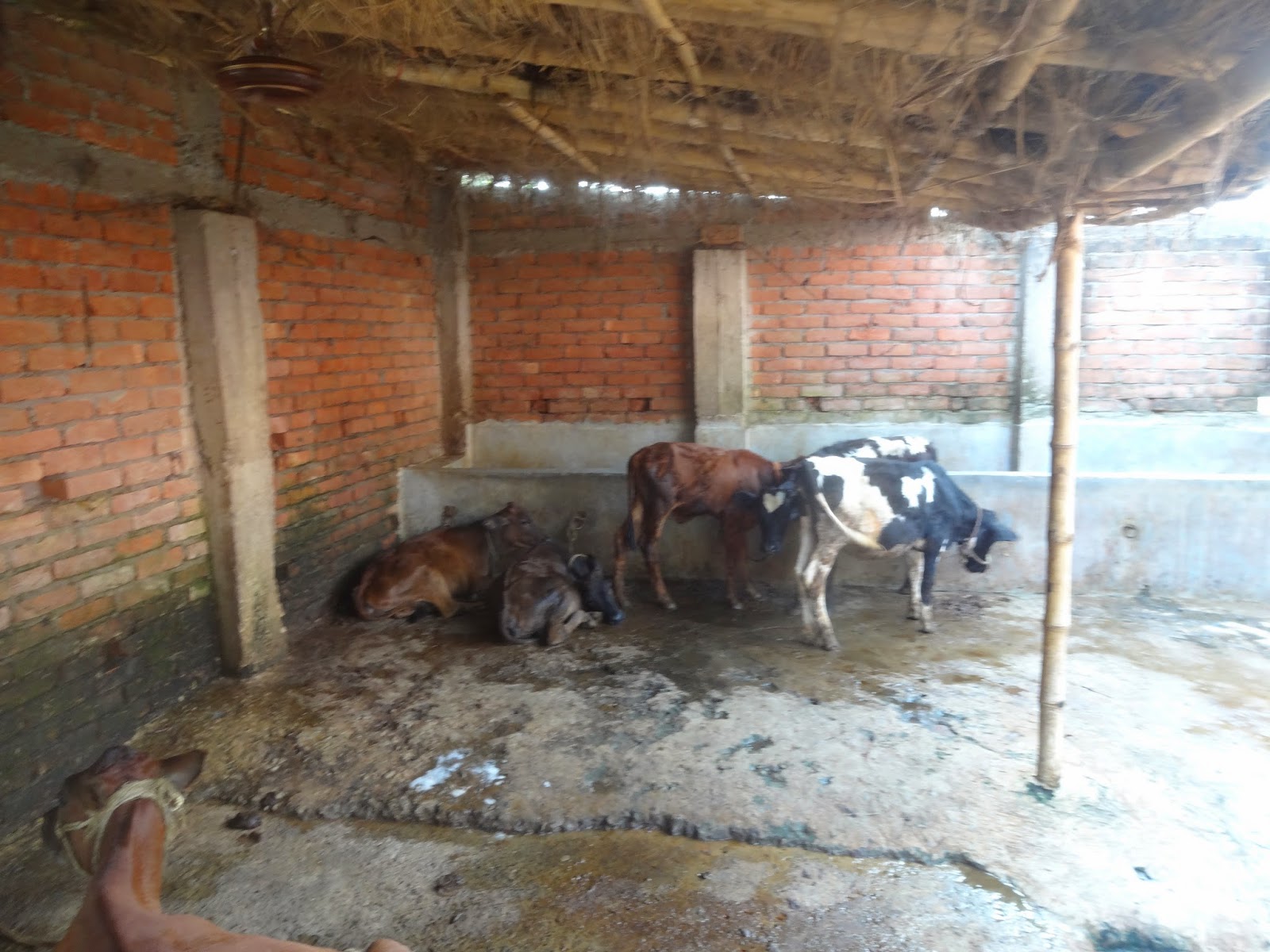 On my trip to Nalanda, i met one of the very few young people who took up the challenge. Mr Rajbardhan Sharma left his well paid IT job in Banglore a year ago to start a dairy farm with his brother on this parents farm. He was lucky to be able to dispose of about 1.5 hectare of land (which is above the average in the area) and put all his savings into a well developed dairy farm with 2 milking machines.


He is delivering is 230 liters of milk daily through the state milk union. As milk price is fixed and relatively low, he is betting on reducing production costs, increasing in scale to benefit from return to scales and increased productivity. At this stage he is also making money from selling fertilizers produced from his manure.

Today, he still can get almost all the fodder from his fields that he cultivates in the rice-wheat system and some fodder grasses. He believes in an integrated farming system, but as he will increase in scale he will need to rely on the fodder market or get more land. He has not yet put a lot of thoughts about optimizing the cows' diet, to improve milk productivity. But i am sure this will be one of this next steps.

He gets the cows from another state to ensure the good quality of his breeds. As acquiring new cows are not so easy, he is also thinking of becoming a breeder's farm for the region.

We sat there in the cow shed sharing ideas about agriculture and dairy around the world (comparing to a Dutch and Kenyan system), we were going through more or less crazy ideas on how technology and institutional innovation could disrupt the current dairy system and lift more people out of poverty. More than just an interview, we had a real exchange of ideas between social entrepreneurs and I hope that social media will help us to keep doing so! Also the agricultural world has become smaller! 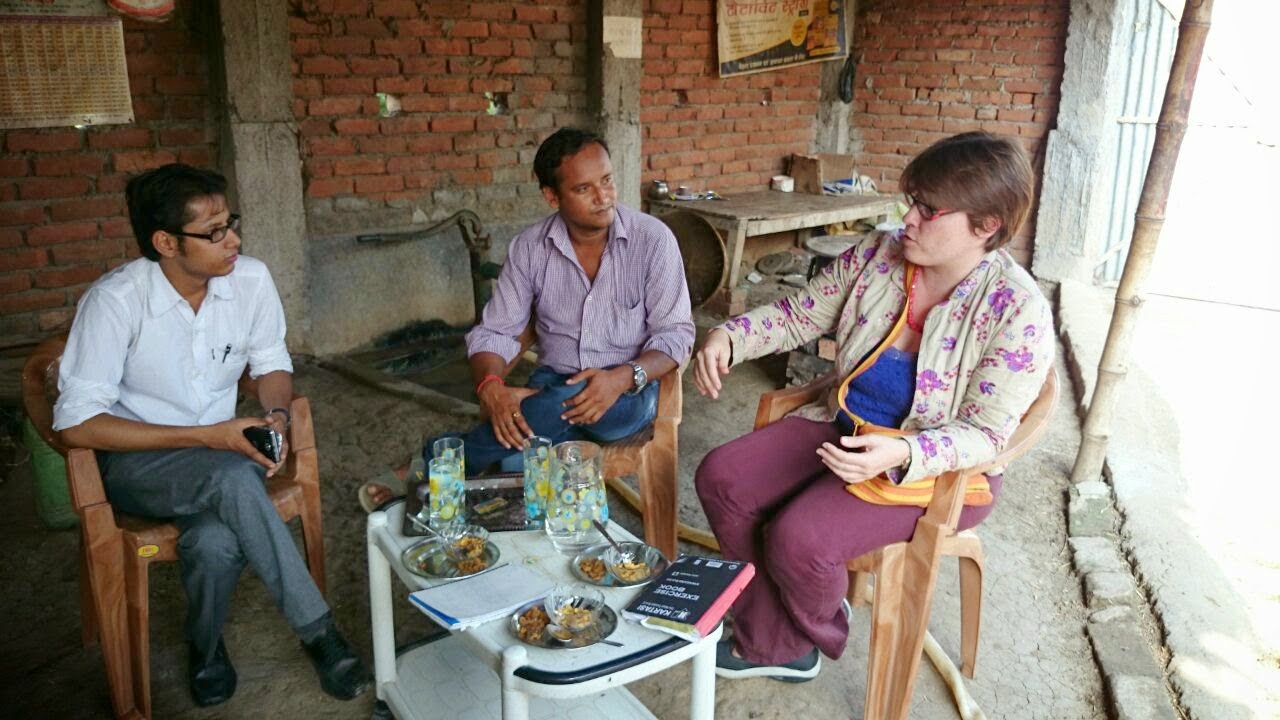 I left the farm with deep respect for this young man who decided to go against all odds into agriculture and proof to his family and friends that far from being a survival job, agri-entrepreneur not only can generate good money, but also contribute positively to a social change that benefits to the people of his country!
Written by Unknown on Wednesday, October 15, 2014 1 comment:

When smallholders link themselves to market : the Kaushalya foundation story

One of the first organization I visited during my recent trip in India was Kaushalya Foundation. The first thing that really strikes you when you pass the door of this NGO, is the high amount of women working there, also in leader position.
Kaushalya Foundation supports the creation of social enterprises, mainly trying to enable farmers to link themselves to market. To do so they enable farmers to create the so-called farmer-producer companies for vegetables, a sort of marketing company owned by farmer through which they are making bulk sales to buyers. These farmer-producer companies are separately registered companies. Each farmer-producer company also host business hub.

A business hub brings together all types of  services. Through this business hub, high quality seed, livestock feed, advisory services (for example on soil quality or weather forecast) to rural areas which critically lack access to these high quality services. Also theses hub offer training to groups landless women to produce farm input such as treated seeds or fertilizer or natural pesticides. Theses products are then sold through the business hub.

To enable the vegetable value chain, Kaushalya foundation is also behind some innovation. They have developed a low cost green house for vegetables. Also they have revolutionized the sales of vegetables. They have a network of vegetables carts with a new design that keeps vegetables fresh for longer. Their carts sell packaged vegetables at fixed prices, making transaction between sellers and consumer easy and quick.

Many of these technologies have been promoted by the government in other states.
Next to all these activities Kaushalya foundation organizes farmer interest groups through which they organize training, field demonstration and advice, including a software that automatically translate results from a soil test into operational advice to manage the fields.

Kaushalya foundation is behind two business hubs in Bihar, namely in Patna and in Nalanda and focus mainly on vegetable production. Nalanda is a place where the milk value chain is not yet very well organized and therefore this farmer producer company could play a key role in organizing farmers not only around vegetable but also livestock production and especially milk.


I was very impressed by this farmer-producer concept, and learned one important thing : the success story here is linking the right technology to the right institutions, focusing only one of the two would probably not lead to such an impressive result. A model to export to Africa?
Written by Unknown on Friday, October 10, 2014 1 comment: