Last week, i was invited by the Danish Refugee Council to an expert panel on mapping migration. I was told : "I know we are doing many things wrong, we would appreciate to have your input on how to improve". I didn't really know what to expect, but somehow I had the feeling that it is going to be one other of these hopeless projects.

When I arrived there i actually discovered a very unexpectedly amazing project, named 4mi : across a set of European and African country, field monitors (interviewers) interviews migrants about their routes, their reason for leaving, the country they want to go but also abuses they have experiences or how many deaths they have seen along the road. There is also a survey that collects information from smuggler. 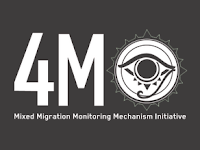 Yes, the data they collect has many issues : the representativeness of the sample, the double counting of death or abuses when two interviewed people refer to the same event. But, it is a goldmine, in a field where there is no data! Where would you look for data about a clandestine activity?

Clearly, it raises many ethical issues. Firstly, the field monitors are not all hired, so what are their rights and how to ensure their security? Secondly, the information collected, does it work in favor or against the refugee? Will it support NGO to reduce abuse of refugee or will it support government to be more restrictive?

They also produce regular info graphics with the data, as well as a set of maps. Unfortunately, it only presents the whole dataset and does not allow to subset over time, therefore not allowing for spatio-temporal analysis : a critique that was well taken and this will be probably adjusted soon.

Maybe my contribution to this whole initiative was raising the awareness that with the emergence of big data, sampling issues will become less and less important as the number of observations are increasing as well as the possibility to develop correction factors. Also i hope that i have convinced them to have a controlled free access to the raw data for the scientific community, so that they can get free insights with there data.

Maybe one day i will be analyzing the relation between livestock loss (a reason for leaving home) and migration as a response to a climatic shock? or discover new other linkages between the livestock sector and migration. It is definitely a new unorthodox source of data for livestock that is now emerging. So let's look at the emerging opportunity rather than on the some pitfalls that this data might have.

In the meantime check out the 4mi website! a clear initiative worth a follow up!
Written by Unknown on Wednesday, February 01, 2017