The Ethiopian highland is a high potential area for agriculture, with good annual rainfall and as discussed in a previous post, Ethiopia could potentially feed the world rather than getting food aid. One problem is that rainfall is very unevenly distributed during the year. During the rainy season, flooding and erosion due to over saturated soil are the major challenges faced by farmers. In the dry season, dry spells are the major reason for crop failure. So one of the appealing solution is collect water in the rainy season and use it during the dry spell for supplementary irrigation of crop. These technologies are usually referred to as "water harvesting" technologies and encompasses technologies such as roof water harvesting, small private ponds, communal ponds, cisterns and so on. 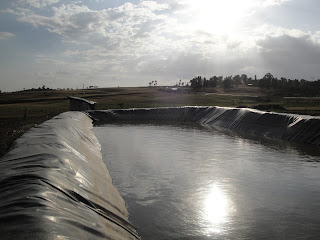 At the Bahir Dar workshop the representative of the Sustainable Water Harvesting and Institutional Strenghthening in Amhara (SWISA) has shown a cost benefit analysis that suggests that only bigger and therefore generally communal infrastructure are worthwhile. In addition, he has shown that  most of the existing water harvesting structures are not used for supplementary irrigation, but for drinking water for livestock. This suggests that we should be very careful about out-scaling water harvesting structures, because their use might be very different compared to what literature suggest. As a consequences impacts could be very different that one might assume and feedbacks in the crop-livestock farming system unexpected.
Written by Unknown on Thursday, October 20, 2011