Identifying dynamics of natural resources in Somaliland through participatory mapping

If i tell you Somaliland, what is your first thought? War? terrorists? Al-Shebab? But in reality Somaliland is all but this. It is a place, which GDP depends for more than 80% on livestock production, exiting for a livestock scientist. It is a young democracy of an country that has not been recognized by the international community, yet has its own currency, own visa procedure and own government. Much of the international aid focuses on emergency relief and food aid. Little money flows for development, but some does, for example with FAO-SWALIM, who create a lot of good maps.

Also Terra Nuova is one of the NGOs that does development work, and works mainly in the livestock sector. ILRI was contracted by Terra Nuova to implement the research component of one of their livestock project. Next to collecting analyzing data and create documentation for a country that has lost it all in a war, we also build capacity of ISTVS the vet school in Sheik. 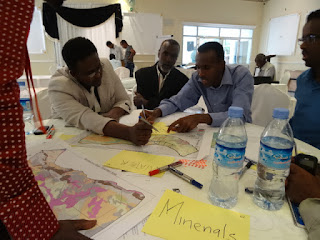 This week, i have hosted a participatory mapping workshop with decision maker to discuss the current state of natural resource that are needed to support the livestock sector. Participatory mapping asks participants to map, i.e. tell us where a given natural resource is and tell us more about that resource, for example the current state of the resource, who the user is, if there are conflicts and if people somehow are changing behavior. 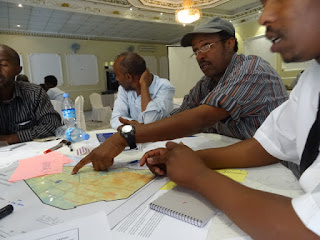 This allows to identify dynamics that define changes of natural resource, so that we can predict changes that might occur in future and support policy maker to take actions now that could address future issues. 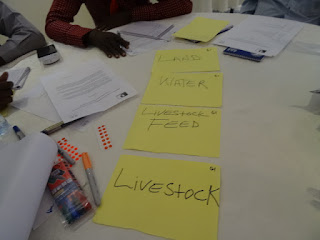 In a first step we have asked participants to rank the resource needed for the livestock sector. All three groups came up with the following order : 1. land, 2.water, 3. livestock feed. Number four was different from the groups, some would say livestock, other soil. 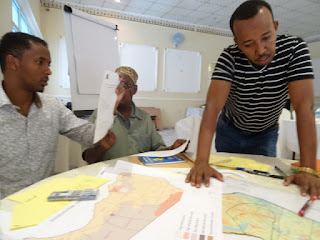 Want to know more about what we learned from the workshop? We are still processing the reports! So keep posted!
Written by Unknown on Friday, October 21, 2016