Pig value chain in Uganda : a stake for smallholders?

In one week, i will be returning to Hoima, Uganda to work with policy maker and other key decision makers involved in ILRI's Uganda Pig projects, to work on an environmental decision making support tool. Time to finish the reporting of the last trip.


We went trough Hoima visiting small farmers such as John the model farm of Devenish, and continued crossing this landscape thinking about the stake of the smallholder.

How will this system evolve? In Europe pigs are kept by large farmers keeping thousands of pigs, what dynamics will prevent this phenomenon in Hoima? What is the comparative advantage of the smallholder?

At the consumer level there is no difference between pig meat from a big commercial farmer or a smallholder. So the price for both products will be the same. Commercial farmers will feed their pigs with commercial feeds that is and probably will remain expensive. That's why the commercial farmer will need to increase drastically the number of animal he keeps in order to benefit returns to scale. Are we still talking of a smallholder, when he owns two hundred animals? 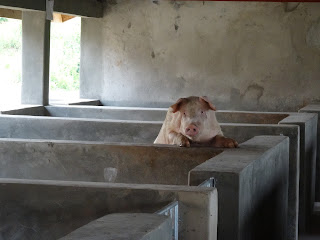 The "real smallholder", the farmer that closes the environmental cycle, combines crops with livestock smartly without huge "industrial-like" investment and yet produces food surpluses in this world will only have a comparative advantage if his feeds are cheaper than the commercial/industrial farmer and therefore can compete. Using agricultural waste, such as crop residue efficiently to feed pig "for free" is one way to support the smallholder competitiveness, but in this world smallholder will not have plenty of pigs, but an optimal number corresponding to the amount of waste such as crop residue they produce on farm. So pigs will not support the poorest who have almost no land, as they also will not have the comparative advantage of free fodder.

A reflection to keep in mind as we are now preparing for the policy and decision maker workshop to parametrize our ex-ante environmental assessment tool for the area in the upcoming weeks! So follow the posts from my up-coming Uganda trip to discover more! 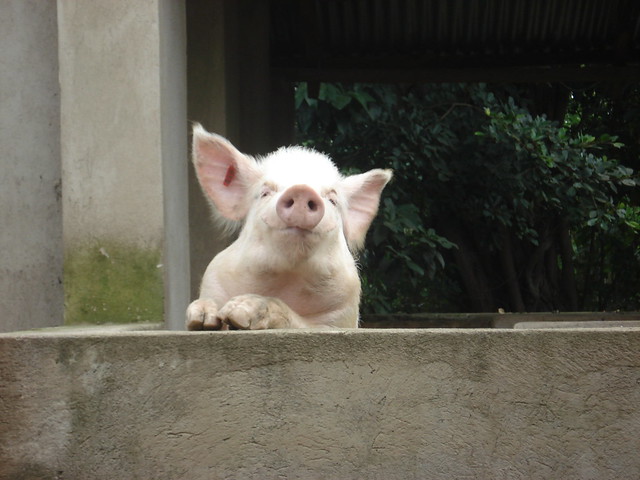 In the meantime, let me thank Robert and Emily from the ILRI office in Kampala for the smooth organization of this trip, and my whole team for the talk and reflections around the pig value chain in Uganda.