Following the goat cheese chain in Ouagadougou, when nothing is also a result

In one of my last post i reported from my trip to Ouagadougou in Burkina Faso to look at the small ruminant value chain of the Livestock and Fish Research Program. After having visited the small ruminant market and having eaten the best goat cheese pizza at the Verdoyant (a restaurant you should not miss would you ever go to Burkina) i decided to investigate where the goat cheese comes from. 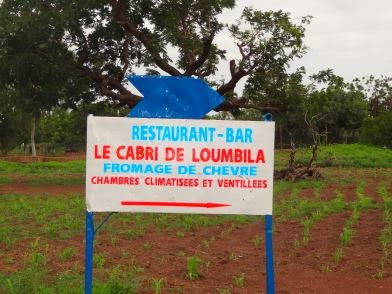 During the stakeholder meeting i was co-facilitating on site selection, i got the chance to talk to many people who know the local situation and i was told, that the transformation sector in Burkina Faso has a huge potential for improvement...

Food for thoughts, I decided during my free day to try to understand what they meant and decided to follow the goat cheese from the producer to the end consumer. I heart of a place not far out of Ouagadougou, a place called Capri di Loubmila. I heart it was not only a restaurant but also a farm that produces the goat cheese.

We arrived, but there was not a single goat, but just huge construction work and some other interesting livestock... 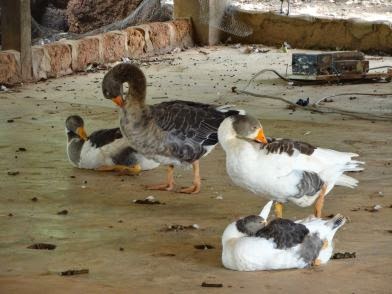 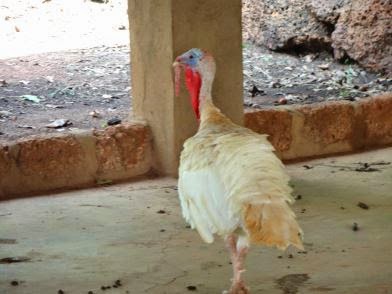 So we ended up calling some one you could help us and some minutes later, Herman showed up on a motor bike. He explained to us that they are rebuilding the hotel and for the time being they have moved the goats and the whole production to another place that would not be accessible by car because of the rain.

As adventure and making the impossible happen spirit and taking up new challenges quickly did not seem to be part of the strengths set nor of my driver nor of Herman, i decided that it might be better not not ask to go there, despite of our very good looking 4 wheel drive...

So i was a little bit disappointed to not see the goats, but delighted to visit another project that tries to link agriculture and tourism. I really hope i will get a chance to stay there once the hotel is finished. It is an attractive site, where one can even learn how to make goat cheese... when the goats will be back. In the mean time i just admired the Karite nut, a tree i had heart about a lot but never seen with my own eyes.
Yet, I learnt that capri di Loubmila sells its cheese for 700 franc ( about 1.4 USD) to a local supermarket chain. This is not the farm gate price, but the one they get when the cheese is brought to the redistribution point. The supermarket takes the risk of unsold. As i never give up quickly, i decided to go to the one of these supermarket. And guess what, when i asked for the local goat cheese, they did not have any. Only the expensive imported goat cheese from France. However i learnt that the cheese is sold to the end consumer at 800 francs, so with a margin of 100, which is about 20 cent. So at least for the cheese it seems that the producer gets a fair share!

The French products in average go for 2000 francs so more than double of the local one. I had a quick chat with the responsible for the cheese aisle. He found that he was very happy with the local goat cheese and there is no issue with it, he just could not get more and had sold it all... i am probably just too entrepreneurial to see a lost business opportunity here...

I left the supermarket convinced now that i understood what the stakeholder meant with "the transformation sector has a huge potential for development", i would add "and the retailing sector too", or at least in the coordination of the value chain. I haven't seen anything of what i wanted to see in the whole day, but on this way i learnt a lot, and seeing nothing is definitely a result!