Meat Atlas : the global dimension about those animals we eat

Especially in the Western world, meat is seen as a bad. Indeed, livestock production accounts for about 18% of the greenhouse production, it requires more land and water to feed one person than on vegetarian diet.With the increased globablisation, impact of livestock production can be exported to poorer countries. A well known example is the cut rainforest in Brazil to grow soya that feds cows in the Netherlands.

The emerging economies (such as China or Brazil) have a growing middle class that demands more animal protein, and the trend of increased globalized negative impact will pressure on the environment, especially in the poorest country where short term economic benefits is weighted more than the environment.

But livestock is not only a curse in developing countries, it is also an opportunity. Livestock play a key role in many smallholder systems : they create manure used to fertilized fields, they bring in the healthy animal protein into very unhealthy diets of the poor, they act as bank, they are mean of traction. The benefits of making livestock smallholder systems more productive definitely overweight the negative aspects of livestock production. The latter is often forgotten in the debates in the Western world, missing out on an opportunity to think about how to support smallholders to improve their livelihood and diets. 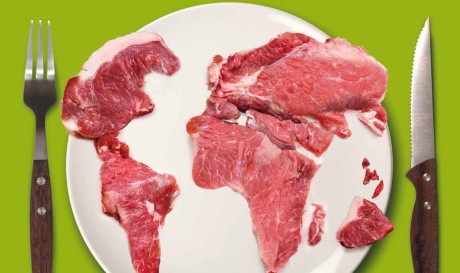 This week, I came across the Meat Atlas, a report from friend of earth Europe, that presents all these globalized aspect of meat production in an easy but nice spatial way. Their aims is to  present a global perspective on the impacts of industrial meat and dairy production, and illustrates its increasingly devastating impact on society and the environment. The way we produce and consume meat and dairy needs a radical rethink. The cover a broad range of livestock related topic, focusing mainly on the industrialized meat production but also cover discussion about some small scale production in Africa. It aims at polarizing, so pushing forward the negative aspect of livestock and missing out the discussion of the positive aspect of livestock in developing countries. Nonetheless it is a nice presentation of existing statistic, and an eye opener to the troubling facts about what we eat.

So get your own copy here!