Last week, I joined one of our team into the fields in Woreta, near to Tana lake. The surroundings of Tana lake belong to the high potential locations for agriculture. During the current long rainy season (my flight was unable to land in Bahir Dar due to heavy storm) farmers are fighting with excess water. Drainage systems and rice cultivation on non-permeable soils are the answers to these heavy rains. In some places maize was flooded and house almost under water. 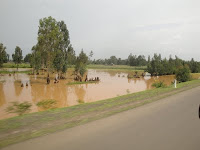 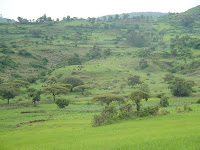 The green watershed about 10 km from Woreta 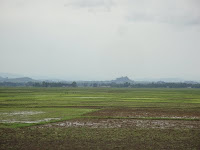 The rice fields in the Woreta plain

After one week in the field with no access to internet and other news, it is pretty shocking have all my friends worried because they have seen pictures of drought and starvation in news :
http://www.irinnews.org/report.aspx?reportid=93247

Interestingly enough, the news was not shared in the few English newspaper of Ethiopia, and as usual some internet pages were blocked. In Addis, it is business as usual, food shortages have not increased.

The big discrepancy between North and South in Ethiopia can be explained by the diversity of Ethiopia in terms of elevation and rainfall. The Ethiopian highland in the North around Tana lake belongs to the humid tropic and is source of the Blue Nile. This area has water excess rather than water shortage these days. The South and lowlands on the contrary experience droughts. The map below (taken from the Ethiopian rural economy atlas from IFPRI) shows annual rainfall and clearly shows much lower rainfall in the South near to the Somali border compared to the Tana lake (blue feature in the North) area. 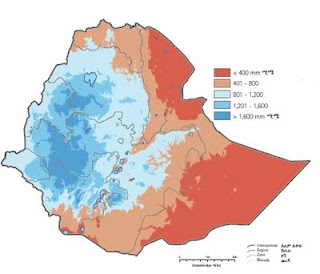